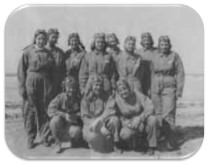 Lt Colonel Yvonne "Pat" Pateman began her long and successful military career in 1943 when she entered the Army Air Forces and earned her wings as a Woman Airforce Service Pilot (WASP). She was the only WASP to have served in three wars: World War II, Korea, and Vietnam. She retired in 1971 after over twenty years as a U.S. Air Force Intelligence Officer. She devoted her later years to bringing recognition to WASP veterans and championing women military aviators through her public speaking and publications In 1976 Pat Patemen helped WASP women become eligible for Veterans' Administration benefits. She was director on the board for Women in the Military Service for American (WIMSA) which successfully raised money and built a memorial to all military women at the entrance of Arlington National Cemetery. She served ten years as the WASP Chair for Military and Veterans Affairs and was National President fo the WASP WWII from 1990-1992. Pateman authored the non-fiction book, Women Who Dared, which was the first to acknowledge women who were military test pilots from WWII to 1996. Following a long struggle with Parkinson's disease, Pat Pateman died at the age of 84 from a stroke.