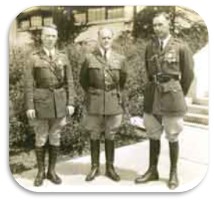 Benjamin Delahauf Foulois was born in Connecticut in 1879. In 1897 he enlisted as a private in the First Unites States Volunteer Engineers where he served in Puerto Rico.  In 1899 he enlisted in the regular Army and served with the 19th Infantry in the Philipines and later the 17th Infantry. He was commissioned in 1901 and continued to serve in the Pacific until 1905 when he went to Infantry-Cavalry School at Fort Leavenworth, Kansas.  He was then started Signal School before going to Cuba until 1907 when he returned to Kansas to finish signal school.

After graduating, he was assigned to the Office of the Chief Signal Officer as the officer in charge of a newly formed balloon detachment in Virginia. In 1910, he was transferred to Texas and placed in charge of the first airplane owned by the U.S. Army. He eventually commanded the First Aero Squadron and served under General Pershing in the Mexican Punitive Expedition. Foulois was transferred to Washington D.C. in 1917 and was eventually sent to Europe to coordinate work and equipment for the Allied Expeditionary Force during World War I. After the Armistice, he stayed in Europe off and on until 1924. He served in several assignments in the United States and was eventually designated Chief of the Air Corps until his retirement in 1935. He stayed engaged with military aviation issues in his retirement and passed away in 1967.