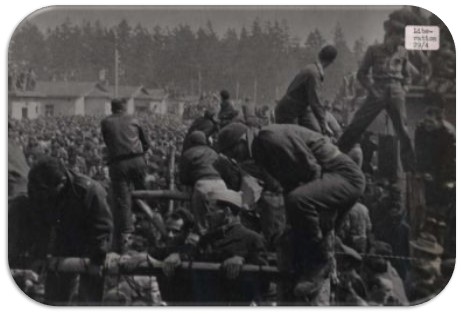 Swedish lawyer Henry Soderberg, as a representative of the International Y.M.C.A. during World War II, was one of seven foreigners allowed within Nazi Germany to visit prisoner of war camps. His remarkable freedom of movement within Germany enabled him to record a rare picture of the conditions of prisoners of war and of the German population. He visited the camps frequently and went to great effort to procure and deliver items requested by the various camps. As a result, each compound had musical instruments, a library, and sports equipment to meet the different British and American national tastes. Chaplains also received the necessary religious items to enable them to hold regular services.

Soderberg formed friendships with many of the American POWs and remained in touch with many of them throughout the years, traveling from Sweden to the United States to attend POW reunions. After the war, Soderberg was a civil aviation official for twenty years before joining Scandinavian Airlines from which he retired as Vice President. His love of aviation and its history led to his writing the book Swedenborg's 1714 Airplane: a machine made to fly in the air. Soderberg passed away in 1998.

IMAGE NOTE: Photograph from Scrapbook 1 in the Soderberg Collection.