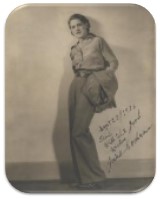 The Women Airforce Service Pilots (WASP) was a pioneering organization of civilian female pilots employed to fly military aircraft under the direction of the United States Army AIr Forces during World War II. The group was a result of the merger in 1943 of the Women's Flying Training Detachment (WFTD), led by Jacqueline Cochran, and the Women's Auxiliary Ferrying Squadron (WAFS) lead by Nancy Harkness Love. The female pilots would eventually number in the thousands, each freeing up a male pilot for combat service and furies. After their training, the WASPs were stationed at 120 air bases across the United States assuming numerous flight-related missions.

The WASP program was deactivated in December 1944 and all their records were classified and sealed for 35 years. In 1975, the WASP organized as a group and fought to obtain recognition as veterans of World War II, but it was not until 1977 that legislation was passed granting the WASP corps the distinction of full military status for their service.