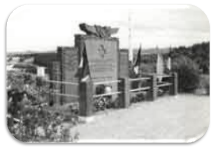 This collection consists of materials pertaining to Operation Carpetbagger during World War II, much of which was compiled by Lt Col J.W. "Brad" Bradbury at the direction of the United States Air Force Academy Political Science Department. Many of the materials are copies of microfilmed records as well as diaries and personal accounts. The collection also includes correspondence with Thomas L. Ensminger, historian and son of a Carpetbagger. The majority of the materials regarding Bert Balchen were donated by his widow, Audrey Balchen.

Included are both paper and microfilm records of Carpetbagger missions, original unit histories of those missions, and files pertaining to resistance operations in occupied counties. There are also some forged documents and descriptions o﻿f various missions conducted by the Resistance that were supported by Carpetbagger missions. The collections also contains magazines, newsletters, and correspondence regarding Carpetbagger operations and reunion activities of the various organization that participated in those operations.

The collections also contains materials collected by Ben Parnell in support of this book Carpetbaggers, America's Secret War in Europe: a story of the World War II Carpetbaggers, 801st/492nd Bombardment Group (H), U.S. Army Eight Air Force, as well as copies of his original manuscripts. Completing the collections are books dealing with the resistance movements, World War II, and the liberation of Europe.

IMAGE NOTE: Photograph of a French memorial to the Carpetbagger personnel from MS 53