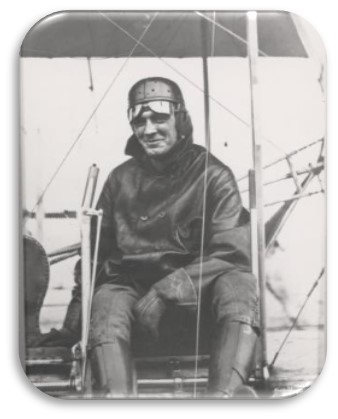 Henry H. "Hap" Arnold (1898-1950) attended the U.S. Military Academy at West Point, graduating in 1907. He served with the 29th Infantry before being detailed to the Signal Corps. In 1911, he was sent to Dayton, Ohio, for pilot training with the Wright brothers, becoming one of the first military pilots. Arnold then became a pilot instructor in College Park, Maryland, and Augusta, Georgia. He served in several other domestic assignments before going to Panama in early 1917 to set up an air service.  When the United States entered World War I, he returned to the U.S. where he lead the Information Service in the Aviation Division of the Signal Corps and later helped lead the Office of Military Aeronautics. At the end of the war he was sent to Europe to inspect aviation activities before returning to several more domestic assignments. Arnold graduated from the Army Industrial College in  1925 and the Command and General Staff School in 1929. He worked on the early development of the bomber and in 1938 he was promoted to Major General and appointed Chief of the Air Corps. During World War II, he served as the commanding general of the Army AIr Forces before retired in 1946. On May 7, 1949, Hap Arnold was appointed the first General of the Air Force, with a five-star rank, by the U.S. Congress before he passed away in early 1950.

While most of the materials from his military career are at the Library of Congress, the McDermott Library has a collection of correspondence, photographs, and memorabilia from General Arnold and his family. Another collection of interest at the Academy library is Murray Green's "Hap Arnold" collection (MS 33).