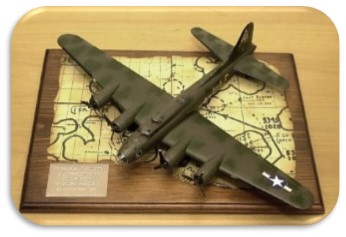 General Theodore Ross Milton (1915-2010) enlisted in the U.S. Army in 1934 before attending the U.S. Military Academy at West Point where he graduated in 1940. He earned his pilot wings with the Army Air Corps in 1941 and from 1943 until the end of World War II, he served in the 8th Air Force in England flying B-17s. He served additional tours in the United States and Europe, including an assignment as the Chief of Staff for the Combined Airlift Task Force, the command that directed operations for the Berlin Airlift. Milton was later named Commander of the 41st Air Division, 5th AIr Force in Japan. He was then assigned the command of the 13th Air Force in the Philippines. In March 1969 General Milton assumed duties at NATO Headquarters in Brussels, Belgium, as the Deputy Chairman, NATO Military Committee. He retired on July 31, 1974.

IMAGE NOTE: Photograph of a model plane on display in Clark Special Collections Branch from the Milton Collection (SMS 323).