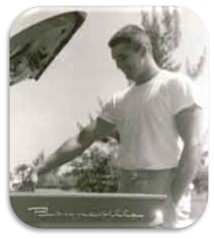 A collection of materials relating the Captain Sijan's military career from his admission to the U.S. Air Force Academy in 1961 until his death on January 22, 1968 while serving during the Vietnam War. A significant portion of the collection pertains to various memorialization efforts undertaken by the Air Force Academy and the Sijan family, the dedication of Sijan Hall, and the posthumous award of the Congressional Medal of Honor.

IMAGE NOTE:  Photograph from Sijan Collection of Sijan working on his car.