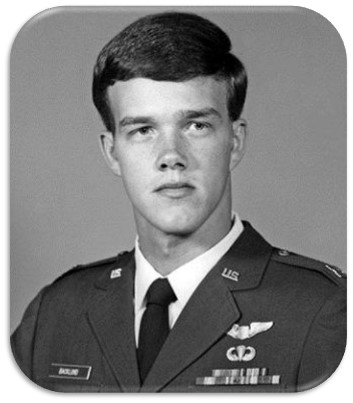 Donald Backlund was born in November 1949 in Kenosha,Wisconsin. He entered the U.S. Air Force Academy in June 1967 and was commissioned a Second Lieutenant on June 9, 1971. Lt Backlund then received an Air Force Institute of Technology Assignment to Indiana University in Bloomington, Indiana, to complete his Masters Degree in History from June 1971 to January 1972. He then attended Undergraduate Helicopter Training at Fort Rucker, Alabama, and was awarded his pilot wings in October 1972 followed by advanced helicopter training at the 1551st Flying Training Squadron at Hill AFB, Utah, from October 21972 to May 1973. Lt Backlund was assigned to th 40th Aerospace Rescue and Recovery Squadron ast Nakhon  Phanom Royal Thai Air Force Base, Thailand, where he flew HH-53C Jolly Green Giant helicopters from May 1973 to June 1975. During this time, Captain Backlund participated in the SS Mayaguez incident and the evacuation of American personnel from Cambodia and Vietnam in May 1975. He then served as an instructor pilot and flight examiner with the 1551st Flying Training Squadron at Hill AFB, Utah, and Kirtland AFB, New Mexico.  From April 1978 to April 1979 he completed fixed wing Undergraduate Pilot Training at Sheppard AFB, Texas. Captain Backlund was attending an A-10A Thunderbolt II conversion training in April 1979 when he was killed during a training flight at the Gila Bend Gunnery Range in Arizona on August 29, 1979. He was posthumously promoted to Major and was buried at the Air Force Academy Cemetery on September 5, 1979. Major Backlund was awarded the 1975 Jabara Award for Airmanship from the U.S. Air Force Academy, and the David C. Schilling Award for Leadership and Airmanship in 1976.