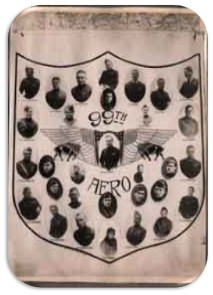 Jefferson Hayes Davis started his service career during World War I as an observer for the Air Expeditionary Force with the 99th Aero Squadron. As a First Lieutenant, Hayes Davis distinguished himself by gallantry in action in the vicinity of Buzancy, France, 2 November 1918, and was awarded the Silver Star. This collection consists of a single memorabilia album for the 99th Aero Squadron and several official publications for training early military aviators in wartime.