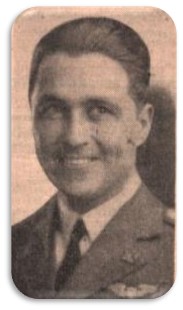 Eugene Lowry Eubank (1892-1997) started his military career as a cadet in the Aviation Section of the Signal Corps during World War I in 1917. In 1918 he was commissioned and became a flight instructor at several military installations starting with Kelly Field, Texas. He also served through World War II before retiring on December 1, 1954. General Eubank earned the Distinguished Service Medal, a Silver Star, and the Distinguished Flying Cross with oak leaf cluster over the course of his career. This collection consists primarily of a memorabilia album of news clippings, photographs, and letters collected and saved by Eubank over the course of his career.

IMAGE NOTE: Photograph of Eubank from his scrapbook.