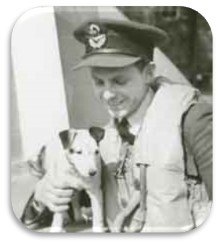 Pendleton enlisted in the Army Air Corps in 1938 but was discharged shortly thereafter. He learned to fly in the interim and was accepted by the British Royal Air Force (RAF) for refresher training in 1940. In the spring of 1941 he departed for Great Britain with several other future RAF pilots during World War II. He served with the 71st Eagle Squadron for less than six months before transferring to another squadron and eventually resigning his commission and returning to the United States by the end of 1941. He later served as an instructor for B-24 bombers and C-54 transports during World War II. After the war, he served in the Army Air Force, Air Force, and Air Force Reserve. He later worked as a commercial pilot and an aerial photographer.