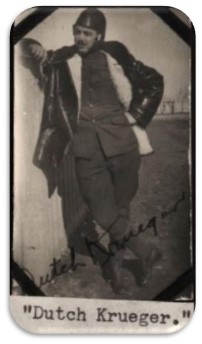 Herman "Dutch" Krueger was born in Nebraska and eventually served with the U.S. Army Air Corps in Italy during World War I, serving under Fiorello LaGuardia. This collection consists of a memorabilia album containing numerous captioned black and white photographs and postcards depicting Krueger's military services as an American World War I aviator in Italy. Many photographs are identified with captions. Mr. Krueger passed away in 1991 at the age of 97.

IMAGE NOTE: Photograph of Krueger from his album.

NOTE: Biographical details from his obituary in the Wyoming Eagle, August 22, 1991.