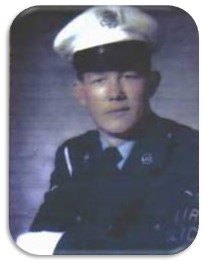 This collection contains Wright's research materials used for the books he has published about prisoners of war detained at the German run prison camp, Stalag Luft III, during World War II. Using the manuscript ledgers of a former prisoner of war, Ewell McCright, as a foundation, Wright went on to send out questionnaires and collect other materials from airmen who had been captured and detained in Stalag Luft III during the war.

IMAGE NOTE: Photograph of Arnold Wright during his service time at Okinawa.