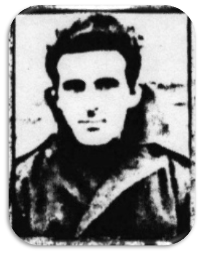 A collection of World War II publications and personal mementos from Korb's time as a prisoner of war of the Germans in Stalag Luft III and later Stalag VIIA. Korb was a First Lieutenant with the 547th Bombardment Group when he was captured by the Germans on November 2, 1944. He was liberated with other Allied prisoners at Stalag VIIA in April 1945.

IMAGE NOTE: Image from a photocopy of Korb's prisoner identification card from SMS 991.