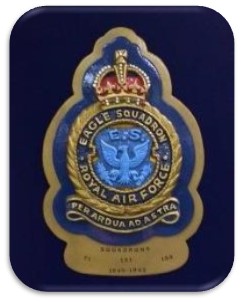 Starting in 1940 a small group of Americans volunteered to fly with the British Royal Air Force (RAF) during World War II.  Three RAF Fighter Command Squadrons, the 71st, 121st, and 133rd were made up exclusively of Americans and became known as the Eagle Squadrons. These aviators volunteered at great risk because of the prohibition against engagement in the war imposed by the United States when the U.S. was still neutral. After Pearl Harbor, when the United States joined the war, some of these aviators moved to the U.S. Army Air Corps.  These collections include donations from several Eagle Squadron pilots as well as the work of Eagle historian, Brig General Philip D. Caine, USAF (ret.).

IMAGE NOTE:  Photograph of a crest presented to the U.S. Air Force Academy in 1989 hanging in Clark Special Collections Branch.