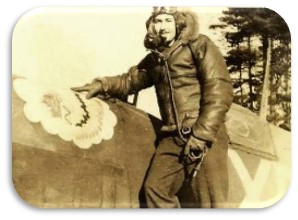 This collection contains photographs and documents from World War II RAF Eagle Squadron pilot, Leo Stratton "Chief" Nomis. Nomis was the son of a stunt pilot who was also part Sioux. His father gave him the nickname "Chief" before perishing in a plane crash when Leo was ten years old. He learned to pilot aircraft as a teen but could not fly with the American armed forces because he did not have the required college education. When he heard of the efforts of the Clayton Knight Committee on behalf of the RAF, he signed up and completed his training in California. Nomis arrived in England in the fall of 1941 and flew with the 71st Eagle Squadron from November 1941 to August 1942. He then transferred to Malta where he flew most of his combat missions before transferred to an East India Squadron at El Alamein. In March 1943, Nomis transferred to the U.S. Army Air Force but was medically discharged in July 1944 due to wounds he suffered in Tunisia. He continued to fly until 1957, flying for Israel in 1948, the Chinese Air Force in 1950, and the Indonesian Air Force in 1952. He eventually moved to a civilian career and retired to California where he lived until his passing in October 2001.

IMAGE NOTE: Photograph of Nomis with a Spitfire from SMS 718.