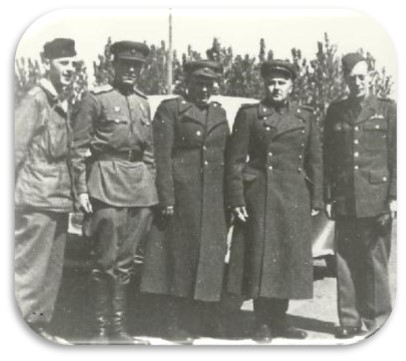 Colonel Hubert A. "Hub" Zemke was a fighter pilot during World War II who went on to become a career Air Force officer. He was flying a P-51 Mustang with the 479th Fighter Group when he was forced to bail out over enemy territory due to bad weather in October of 1944. After several days of evasion he was capture nuy the Germans and was eventually sent to the Stalag Luft I prison camp at Barth, Germany. He was the son of German immigrants and spoke fluent German which allowed him to communicate with camp officials. He became the unofficial commander of approximately 7,000 prisoners who dubbed themselves "Provisional Wing X". After the war, Zemke stayed in the Air Force participating in the Berlin Airlift and working in the Pentagon among many other assignments. The collection at the U.S. Air Force Academy holds a collection of material focused on his time as a prisoner of war.

IMAGE NOTE: Photograph from SMS 864 of Russian visitors to Stalag Luft I, Zemke is on the far left.